What grinds my gears

Returning from a trip today I find disgruntlement in the McAuley household - "Interwebs is broken" is the user assessment. Initial probes show it's actually sort of connected, but it's clearly got some issues... 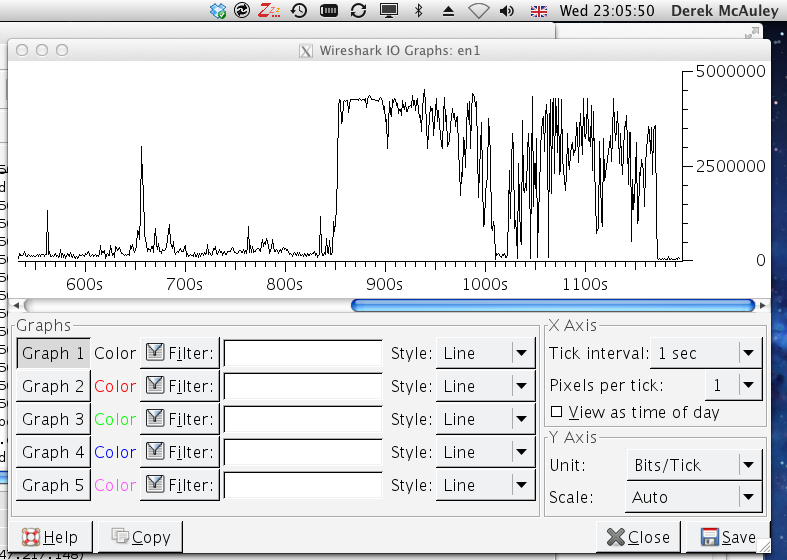 So "to the batcave" - I fire up Wireshark running off a my MacPro second Ethernet port attached to my home Ethernet switch which happens to have a SPAN port that mirrors all traffic to and from the home router (this is a geek level desire that in a home ethernet switch costs you £40 extra to satisfy). Technicals aside, what I find is going on is this (starting the network packet capture at about BST 22:46)...

Now at this point I'm miffed - I've paid a premium for years for an "unlimited" service - looks like someone decided to change the arrangement. I know my ISP does have "capped" services, where the deal is that there's no limit from 2300 until 0700, so I've clearly been dumped into this camp - they've suppressed us to about 400kb/s during "peak hours" and we got switched back on at 23:00.

Our household is now at a baseload > 512kbps, and as such is suffering the same problems as laid out by Nagle (1984) and Mogul (1987) - congestion collapse; so lets face it not that new a problem.

How has we go to this ridiculous situation you ask - well, it started with "Why am I paying £50 per month to Sky?" - so we signed up for NetFlix, and started using iPlayer; as background we have a home energy monitor that chats to a cloud service every few seconds; we also now have 3 iPhones in the house; Diablo 3 was released and last week that was at least 3 downloads (24Gb); ...

So I've figured out why "the Interwebs is broken", but I did bring to bear some several years of network measurement experience; not every household is so unfortunate as to have a resident networking geek.

So lets roll forward to the Internet of Things; let's think home care for the elderly using all the latest tech, and then, "sorry your mum's dead because she watched too much iPlayer and we cut her bandwidth". Jeez, we've got a long way to go to sort this out.

Anyway, I'm engaged in a dialogue with my ISP; I'll not name them until they shame themselves.