At a workshop in my house 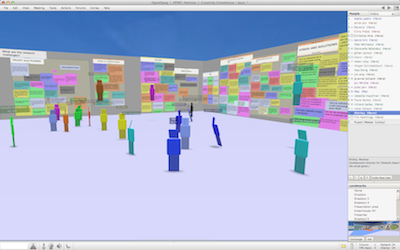 In Hitchhiker's Guide to the Galaxy we hear of one Zarniwoop who is "...in his office, but on an intergalactic cruise".

Well today, I'm into the third day of a workshop but in my house.

We're using OpenQwaq and running around in a virtual conference centre trying to figure out the question to life the universe and everything; well more precisely "achieving work-life balance in a digitally dependent world". This virtual workshop funded by the RCUK Digital Economy theme.

However, we're also part of an experiment in that we are being studied as part of the Creativity Greenhouse project funded by EPSRC looking a novel ways to facilitate online creative workshops and after several pilots we're into the real thing with serious money on the table for successful research proposals.

Great fun so far and beats the heck out of audio conferencing, and when we finish at 5 tonight I'm home already and a mere 100yds from a fine pint of Woodford's Wherry.

Isn't this what the digital economy and work/life balance is all about? :-)