Update: I’ve now wrangled the MacOS client to work, but it does not like having two tunnels open at once (although you can bring up multiple tunnels via “Systems Preference > Network”), and you have to set ip forwarding by hand.

I’d been dipping in and out of trying to get a VPN setup so that my phone is always connected into my home to talk to home IoT devices (here using a a Philips Hue as an example), my NAS box, in home cameras, etc. With regards to IoT devices in the home I fundamentaly object to being forced to use a cloud service to essentialy solve the end to end networking problem that the extensive use of NAT in IPv4 has given us.

This is both based on the architectural principle that it’s stoopid, and on privacy and cybersecurity grounds. These systems somtimes, but not always, use TLS for the communications with the server, but rarely do end to end encryption, so the data is exposed on the server, and hacking into the server permits subversion of all devices. But even end to end encrypted systems could suffer a DDOS, which of course companies can pay to defend against by handing over hard earned income to Cloudflare. For companies this data then may fall under GDPR and bring with it legal obligations, and handing over hard earned income to lawyers, although actual compliance in this space is woeful. Finally of course, the myth is that all data is valuable, so some fools think they will be able to montise the data of when I switch my lights on and off - yeah maybe to burglars looking for times of no occupancy. 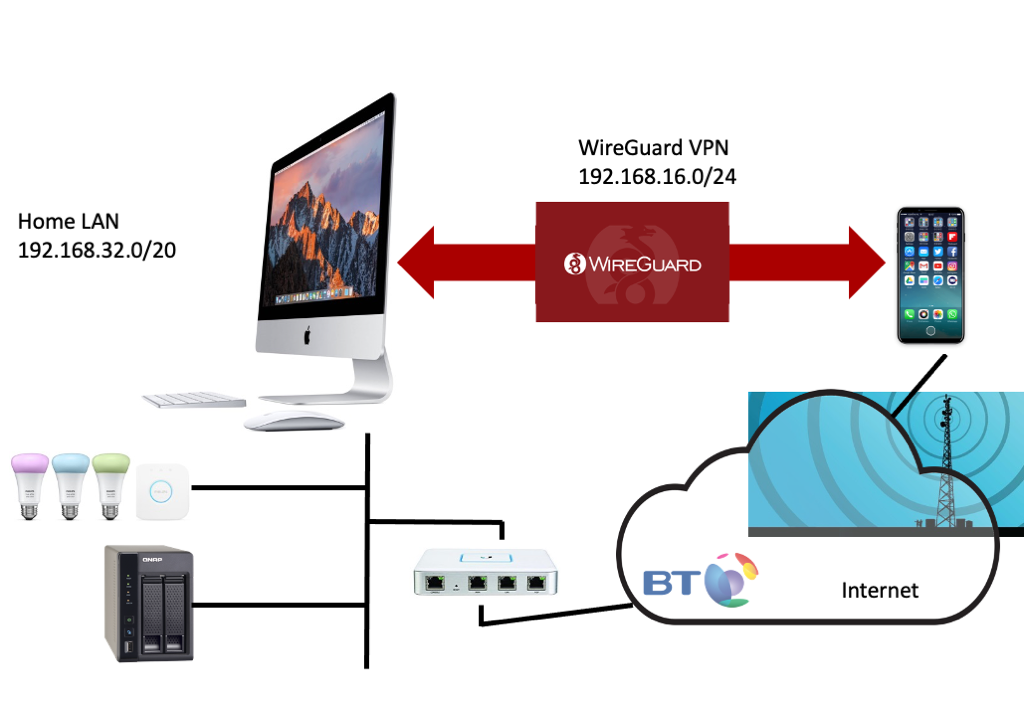 We have choosen WireGuard in the TANSEC project as we are keen to play with physical interactions as a way to establish a permanent bonding between your phone and your home network, and with both the out-of-band nature of the Wireguard key exchange and the "permanent" keys with no requirement for per session login involving a user, it was the obvious choice. (Neverminding the Wireguard fans pointing out it many other benefits such as small code base, speed, modern crypto, etc.)

This excellent article by Marc Barrowclift finally clarified WireGuard configuration for me. Indeed I realised that for my setup, it was even simpler than his configuration. However, I do end up with a non-optimal forwarding loop as most of the IoT devices we are talking about can only ever send things not on the local network to the default router assigned to them by the DHCP. Even if you could add static routes or indeed fire up routing demons in some places (like the NAS), who could be bothered for such marginal bandwidth efficiency gains. Anyway as I have a Unity Ubiquiti router (and switches and WiFi), which does actual, err, routing, I can easily deal the routing problem there. It'll do until the TANSEC project gets it all built in an OpenWRT router. 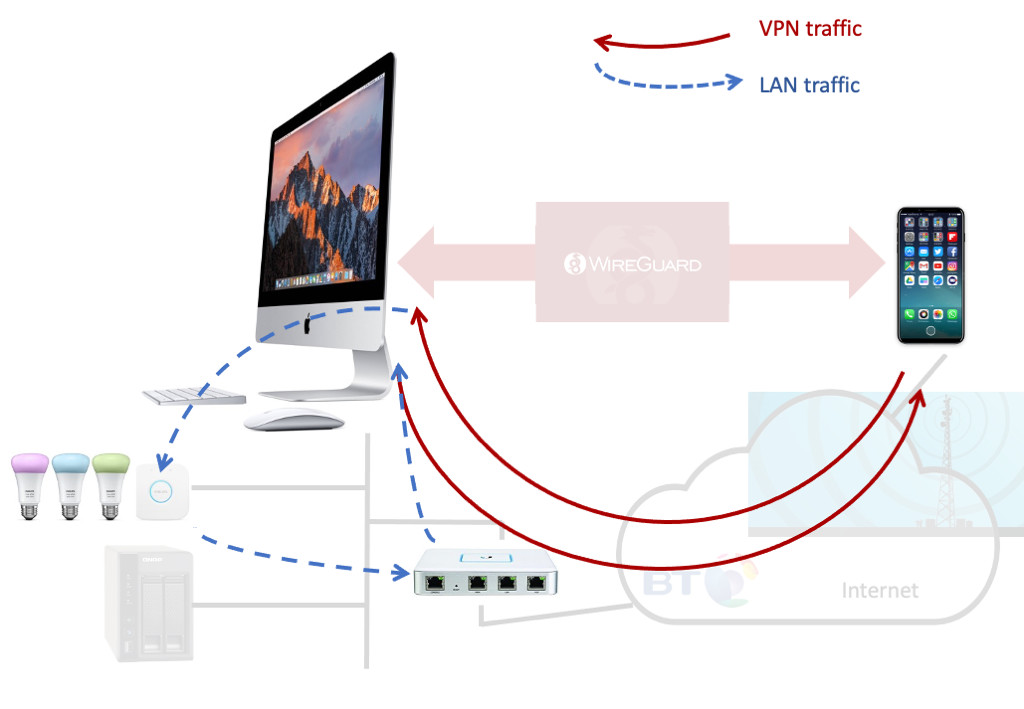 I had the view from my previous fiddling around that the iPhone WireGuard client could only route to the subnet of its interface address; well whether I just missed this or iOS has changed I dunno, but the client configuration of:

adds the needed routing to the iPhone to forward the packets for the Home LAN over the WireGuard tunnel.

So here are the simplified (from Marc’s setup) configurations you need. His “postup.sh” and “postdown.sh” are not needed as we are not doing NAT, and the “server” configuration is simple, here “home.conf”:

To fire it up automatically on your Mac, you need to follow Marc’s instructions. In all it’s working well, with the minor indigestion of the forwarding loop; and it’s not really a general solution given many domestic routers would not let you add a static route.

I’ve seen Unity Ubiquiti community posts about installing WireGuard from the commandline, but there are only so many things I have time to mess with and getting into commandline stuff on the router is not one of them.

but I’m pretty sure he was trolling me at this point; although it is what Tailscale are using. In all honesty another “too much hassle to be bothered” for the payback.

The mission is that one day all routers will as standard come with a standardised VPN and the whole domestic IoT world can shift from corporate surveillance model to a fundamentlaly more private and secure solution.

Anyway, onward and upwards, IPv6 next. Not that many IoT devices support it, but because it is there.